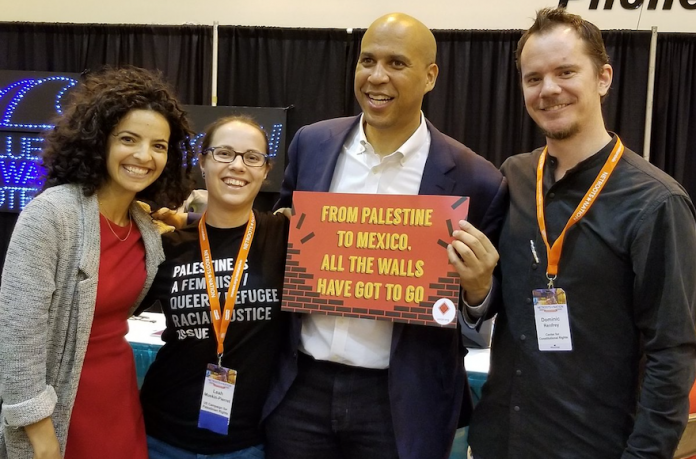 US Senator Cory Booker sparked controversy last weekend when he was photographed holding an anti-Israel sign at a political gathering in New Orleans. But for all the outrage the incident stirred, the truth is that the New Jersey Democrat’s shift against Israel began more than two years ago—not coincidentally, around the same time that he began gearing up to run for the 2020 Democratic presidential nomination.

As mayor of Newark from 2006 to 2013, Booker cultivated friendly relations with North Jersey’s large Jewish community. Some Jewish newspapers made much of the fact that while a Rhodes scholar at Oxford in his college days, Booker struck up a friendship with Shmuely Boteach, who was the Chabad campus rabbi there at the time.

Booker first won election to the US Senate in the autumn of 2013, and during his first years on Capitol Hill he was widely considered a reliable friend of Israel. But all that began to change in the spring of 2016. Despite pleas from New Jersey’s Jewish leaders, Governor Chris Christie, and other supporters of Israel, Booker endorsed the Obama administration’s Iran deal.

“I had concerns about the Iran nuclear agreement,” Booker declared, but “an imperfect deal” was better than nothing. That position looks much less tenable in the wake of Israel’s seizure of Iranian documents revealing Tehran’s secret nuclear arms development and its deception of the West during the arms negotiations.

Booker’s position came as a shock to Rabbi Boteach, who, during Booker’s pro-Israel days, had repeatedly said, “I am arguably the person who has had more influence on his life than any other person, and I took his life in a totally different direction.” Shortly afterward, Booker published his political memoir, United—obviously part of the preparation for a presidential campaign—and did not mention Boteach anywhere in the very lengthy acknowledgments.

For Senator Booker, the issue was never the dangers of Iran, the threat to Israel, or his friendship with Shmuely Boteach. It was about lining up with the left wing of the Democratic Party in order to boost his chances in the race for the 2020 nomination. Soon he began pouring it on.

At the February 6, 2017, Senate hearings on the nomination of David Friedman as ambassador to Israel, Booker distinguished himself as one of the harshest and most relentless of Friedman’s interrogators. For seven and a half minutes, Senator Booker hectored and repeatedly interrupted Friedman, accusing him of “hate speech” and “demeaning the character of another human being” by criticizing politicians who have been unfriendly to Israel.

Booker also berated Friedman for having referred to the antiSemitism that has been rife in the State Department for many decades. According to Booker, the State Department is staffed by “incredible professionals who work there who often put themselves in harm’s way for this country, who make sacrifices for the family of resources (sic).”
Several months later, Booker’s stance on Israel was put to the test again, this time when the Senate voted on the Taylor Force Act, to make US aid to the Palestinian Authority conditional on the PA halting its policy of paying terrorists. Booker voted against the bill.

The incident in New Orleans last weekend took place at the annual convention of Netroots Nation, the main networking group for the activists in the far-left wing of the Democratic Party. Booker’s appearance there was obviously intended to lay the groundwork for his 2020 White House run.

The Netroots community is heavily skewed against Israel. The New Orleans event included panels titled “Progressives for Palestinian Rights” and “Organizing for Palestinian Rights and Building Cross-Movement Connections,” featuring Palestinian extremists, BDS promoters, and Muslim militants. Several of them posed with Senator Booker in the now-infamous photo in which he is seen smiling and holding a sign reading, “From Palestine to Mexico, All the Walls Have Got to Go.”

A spokesman for the New Jersey Democrat insisted that Booker “didn’t have time to read the sign” and didn’t know what was written on it. It’s not plausible that a lifelong politician such as Booker would hold up a sign without reading it.

A more likely explanation is that Senator Booker has made a political calculation. He believes he needs the extreme left wing of the party in order to win the nomination, and he assumes that there is Jewish dissatisfaction over President Trump and that it is so widespread that Booker would have the Jewish vote in his pocket in 2020. The sign that Booker held for the photo in New Orleans was, in other words, just another sign of where Booker is placing his bets as he prepares to run for president.

Dr. Medoff has taught at Ohio State University, SUNY-Purchase, and elsewhere. He is the author or editor of 19 books about Jewish history and the Holocaust; his latest is Too Little, and Almost Too Late: The War Refugee Board and America’s Response to the Holocaust.

“A Gantz Yahr Freilach!’’ // A heart-to-heart conversation with the noted...

The Gift That Keeps on Giving // Rep. Greene’s foot-in-mouth disease