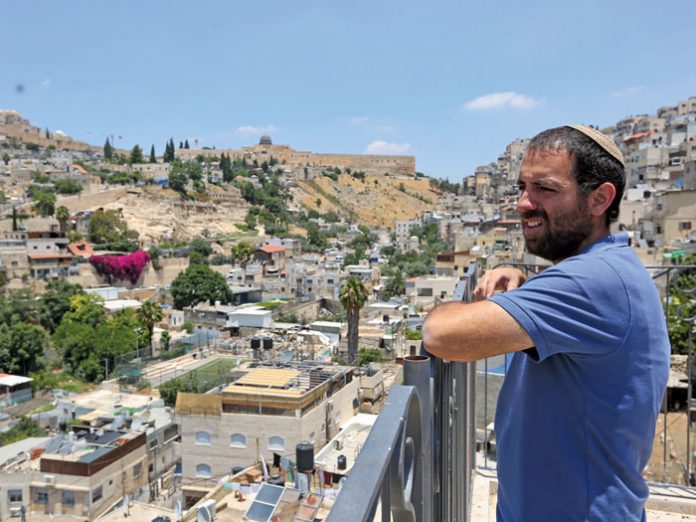 One floor after another, one staircase followed by another staircase, we climb higher and higher in Beit Yehonatan, the house that we learned had been officially named for the American spy Jonathan Pollard. Its builders hoped, and continue to hope, that one day Pollard will be allowed to immigrate to Israel, and when he does, he will choose to live here.

This house is the tallest building in the hilly village of Shiloah, which the Arabs call Silwan. Among the cluster of two- and three-story houses on the mountainous slope, Beit Yehonatan clearly stands out.

There is no elevator in the building; the stairs are narrow, and during our arduous climb, we pass by doors bearing the names of the families living there. More than 20 families live on the seven floors of the building, and although the Pollard family is not among them yet, there is another Jonathan living here, and he accompanies us today. He is a cheerful, hearty young man, and although his name is the same as the building’s, he was not born here.

No one lives on the lower floor of the house, which is given over entirely to Border Police officers who protect the building. Weapons, helmets, bulletproof vests and other military equipment are stacked alongside cases of assorted soft drinks, donated by the grateful residents of the house. These guards are the ones who deal with the hail of stones and the regular barrage of Molotov cocktails thrown at the house. After all, Silwan is one of the most hostile villages in East Jerusalem.
We have followed a long and tiring road to reach this place, a road that began at the entrance to the Ir David complex, down into the King’s Valley and past the Gihon spring. We were accompanied by two security guards—one in front and one behind us. Silwan is located in one of the most ancient areas of Yerushalayim, established by Dovid Hamelech near the Gihon spring, a primary source of water for the original city.

Our tour guide points to what is believed to be the palace of Beit David. But we venture past the antiquities and enter the Arab village, walking between the alleys, along crooked streets and up winding stairs. We can’t help but notice the hostile glances cast at us by the inhabitants. Some of the houses have graffiti and posters against Israel and Jews; many Palestinian flags are flying. Even though this is part of Jerusalem and completely under Israeli sovereignty, it doesn’t feel that way.

It has taken a long time to reach our destination, but we are only at the beginning of the tour. We now have to navigate seemingly endless flights of stairs, because Amichai Levin, who is guiding us through this maze with endless patience, assures us that at the top we will see something unlike anything else in Jerusalem. And he is correct.

When we reach the top floor, we find the open doors to a beit midrash and we are immediately surrounded by the beautiful sounds of Torah study. The room looks like a kibbutz galuyot, an ingathering of exiles, as about 50 yeshivah students are engrossed in learning.

A Belzer chasid is twirling his peiyos alongside a yeshivah student from Chevron who is explaining a sugya in the Gemara. Beside him, an avreich who has just completed his studies at Yeshivat Porat Yosef delves into his sefer with a yeshivah student who has a large knit kippah on his head. The students here come from all over the Jewish world—chasidim, Litvaks, Sefardim, chutznikim, Mercazniks; all of them study together, and the words of Torah flood the beit midrash. Only the heavy steel bars on the windows remind us that we are standing in the most hostile neighborhood in Jerusalem, not in the middle of Geulah and Meah Shearim.

Climbing up to the roof above the beit midrash, which offers a panoramic view, we find two chasidish yeshivah students sitting together on a bench discussing their studies. There is nothing unusual about that, other than the black iron grille installed above them to prevent stones thrown by the neighbors from hitting anyone on the roof. I can see a number of sharp stones and broken tiles perched above us on the grille, proof of the necessity of this precaution.

“On the day the American Embassy moved to Jerusalem,” Chaim, one of the avreichim, tells me, “the Arabs demonstrated and we suffered a major attack. They threw stones and three Molotov cocktails, but nothing happened, nothing caught fire, and the flames went out.” The roof is paved with stone tiles, and the door opening to it is made of reinforced steel and closes securely. From here, the entire village of Silwan, Ir David, and the Har Habayis can be seen from an unusual vantage point.

The kollel has been in existence for several years and is headed by Rabbi Shmuel Stern and Rabbi Yoel Danenberg. It is named after Yehoshua Eliyahu Rohr and was founded by the renowned philanthropist Shmuel Rohr, z”l, who also contributed to the purchase of the building.

I ask a talmid from Yeshivat Chevron Knesset Yisrael in Givat Mordechai if he makes this dangerous trip every day.