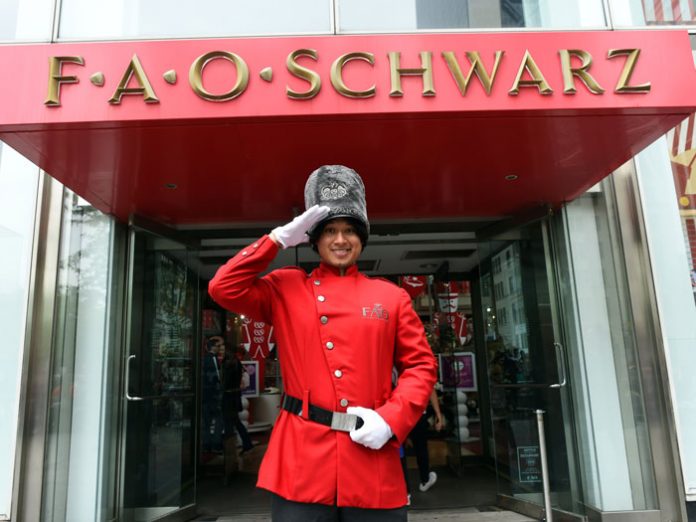 One blazingly hot Chol Hamoed day, when I was around nine years old, my parents beat the heat by taking me and my siblings to an enchanted place called FAO Schwarz. We looked, wide-eyed with wonder, at life-sized dolls, at robots that walked and talked, at a carpet that looked like piano keys large enough to step on, and if you did—step on them, I mean—they played music like a real piano. But I knew not to ask if we could buy anything to bring home with us, because my parents had already told us that
FAO Schwarz was not a toy store.
It was a toy museum.

Twelve years later, I was on a date in the city when we passed FAO Schwarz.
“Oooh,” I said. “That place is magic.”

“It’s great,” agreed my date. “It’s full of one-of-a-kind toys from all over the world. I remember buying Laser Tag guns there.”

For the uninitiated, Laser Tag guns are the most awesome toy you could ever even imagine as a little boy in the ’80s.

“Yes. But,” I said, trying to be respectful of this obvious impossibility, “FAO Schwarz is not a toy store. It’s a toy museum.”

He looked at me to see if I was serious. I was. He laughed. He laughed for a while. It got uncomfortable. (I married him anyway.)

I don’t blame my parents at all. If all ten of us kids bought something at FAO Schwarz, we would have needed to take out a second mortgage, or sell one or more of our number. Pretending that FAO Schwarz was a toy museum is genius. (Genius on my parents’ part, not on mine. As a friend of mine put it, “What were you thinking when you saw all the price tags? That it was referring to the year the piece was made? Like, ‘Oh look, darling, this doll was made in 39.99!’”) But it did get me thinking that I probably wasn’t the only person in the world who unknowingly clung to an idea that was long past its expiration date.

At least I hoped not, because it would make it far less embarrassing for me.
Yes, dear readers. I have researched and interviewed for and wrote an entire feature because humiliation loves company.

And what I have discovered along the way is that it’s true what the old-school psychologists used to say: Everything really does stem from your childhood. Or at least, lots of things do, because there are so many false ideas and incorrect beliefs that we form as children that linger into adulthood. From ideas as innocent as food mixtures that should never be mixed together (I’m looking at you, peanut butter and pickle sandwich), to thoughts that explain—incorrectly—the way the world around you works. Like, no, the brown spots on a banana are not just spots of honey, but after dealing with my own kids’ plethora of half-eaten bananas, I can understand exactly why your mother made you believe that they were.
“Oh, yes!” said a friend of my sister’s when I explain this concept to her and ask her if she can think of an example from her own life. “Like, did you know that my mother told me that when the ice cream truck is playing music, it means that there is no more ice cream in the truck?”

“Yes. And one day, I’m married, three kids, expecting a fourth, and the music of the ice cream truck is playing, you know the song, dadimity-dimity-dum-dum-dum, and my kids ask me for ice cream and I say, ‘Sorry, kids, the music is playing, which means no more ice cream.’ And then I watch as the truck, still playing music, slows down. A line of kids forms, and they each buy themselves an ice cream and I slap myself on the forehead. When I called my mother, she laughed for like 20 minutes straight. Seriously, I put the phone down and picked it up 20 minutes later and she was still laughing.”

When I put the question to a few more people, the ice-cream truck music-that-meant-there-was-no-more-ice-cream was repeated twice, proving that some parents are real geniuses and we are lucky that they are using their powers for good and not for evil or we’d be in real trouble.

Not all of our long-standing and completely wrong beliefs stem from something that our parents told us. Some come to us courtesy of beloved older siblings, friends, or beloved older siblings of friends. Some are formed all by ourselves due to a conclusion we come to as a very young child trying to make sense of a big, confusing world.

I asked pretty much every single person in the whole world to share with me their beliefs that formed during their formative years. Seeing examples of how others perceive the very same world we all live in gives new meaning to the old adage not to judge anyone until you walk a mile in their shoes. Because we live in the same objective reality but in very different subjective worlds, and that makes our own experiences unique in many ways.

And more importantly, a lot of the beliefs are hilarious.