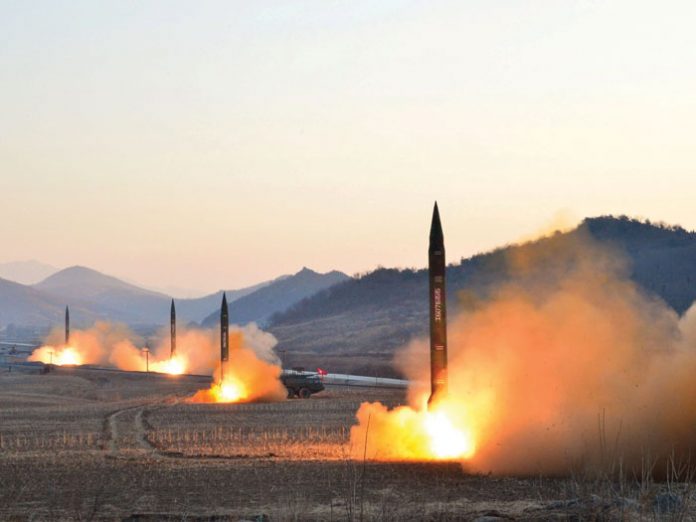 There is a website called 38 North, which is a navigator’s term of reference to the 38th parallel of northern latitude, which also happens to be the old ceasefire line between American and Soviet Troops at the end of World War II and now forms much of the political boundary between North and South Korea.

38 North is an alliance of academics, analysts and researchers loosely affiliated with the Defense Department. Although their organization was formed out of Clinton-era appointees, many of their members also served in the Reagan and Bush administrations.
38 North has done some interesting reporting about the progress in North Korea shutting down a nuclear test site in the country’s northern side.

This was clearly a reference to the Punggye-ri Underground Test Site, which had its four tunnel entrances blown up with much fanfare in 2018. The problem was that satellites show there was apparently a fifth portal that was not touched, so the test site may not be shut down at all.

More suspiciously, the amount of explosives used to shut the portal entrances was reported to be quite minimal: barely enough to close the tunnel openings, and nowhere near enough to collapse the tunnels themselves. It leaves the distinct possibility that this nuclear bomb test site could be reopened with a steam shovel and some dump trucks in the space of a few hours.

That is not the only fly in the ointment. On June 21, 2018, the 38 North group used commercial satellite photos to confirm that the North Koreans were a bit tardy in dismantling some of their other nuclear sites:

“Commercial satellite imagery of North Korea’s Sohae Satellite Launching Station from June 12 shows no apparent activity related to dismantlement of its rocket engine test stand. This stand has been suggested as the probable location US President Trump was referring to in his post-Singapore Summit statements that North Korea is ‘destroying their engine site. They’re blowing it up.’”

The satellite, however, showed that the truth was that nothing had been blown up at all. A week later, on June 21, 38 North delivered more bad news. Not only had the North Koreans not dismantled their nuclear reactor at Yongbyon, but satellite photos showed the North Koreans were rushing to expand it “at a rapid pace.” However, 38 North assures us, this discrepancy does not mean that Kim had betrayed Trump:

“Continued work at the Yongbyon facility should not be seen as having any relationship to North Korea’s pledge to denuclearize. The North’s nuclear cadre can be expected to proceed with business as usual until specific orders are issued from Pyongyang.”
In other words, maybe these were just old construction orders and the workers were waiting for new orders to start the dismantling. Just a bureaucratic snafu. Nothing to get worried about. In fact, the satellite photo showed no trace of a plume coming from the reactor, so it may not even have been in operation. Not even a water discharge from the cooling pipe. Maybe it had already been shut down:

When you read the fine print, 38 North admits that the lack of a visible plume could just have been due to weather conditions or the time of day that the satellite passed overhead. I checked satellite photos from a few months earlier. The plume was visible as was the snow melted by the hot water discharge. Yep, the plant was working all right.

Item by item, 38 North minimized the impact of the satellite photos that showed major expansion of the infrastructure. But there was one detail that could not be minimized: The satellite showed that a stain on the northwest corner of the long blue roof had gotten bigger. A lot bigger.

I knew what was causing the orange stain to grow. It was steam from the cooling plant to service a cascade of centrifuges. The North Koreans had not stopped enriching uranium at all; in fact, judging from the increased size of the stain, they seemed to have increased production. The Yongbyon plant was running night and day to produce as much uranium as possible.

Maybe they were just trying to make more low-grade uranium fuel for the reactor. Sort of an odd thing to do if you plan on shutting the reactor down. 38 North glossed over the issue:

“The increased roof staining at the northwest corner of the cascade halls indicates continued operations at the Uranium Enrichment Plant. The staining is caused by the deposition of water vapor coming from the six cooling units associated with gas centrifuge operations.”

This just happens to be the same building visited by an American nuclear scientist, Dr. Siegfried Hecker, in 2010. The North Koreans had never disclosed they had a uranium enrichment program at all. When the scientist confronted them, they later admitted it could be used as a weapons-grade cascade, but insisted they had a right to enrich as much uranium fuel as they wanted.