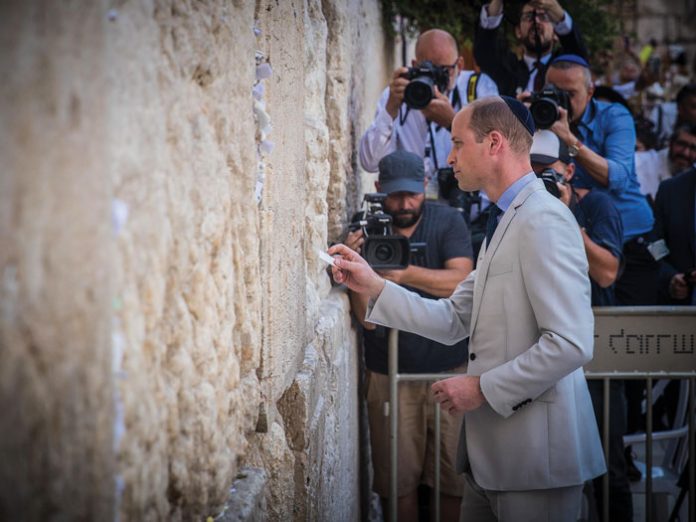 There was great excitement in the Israeli government and some of the Israeli press over the recent visit of Britain’s Prince William to Israel. That elation may have been true for British Jews, as well, as noted in a recent op-ed by UK Chief Rabbi Ephraim Mirvis: “The visit of the Royal family member sends a powerful message to the Jewish world and particularly to the Jews of Great Britain: We understand and respect the very deepest recesses of your identity.”

But that intoxication with the prince’s trip was counterbalanced in a Haaretz editorial, which started: “On Monday, a 36-year-old unemployed helicopter pilot whose sole role in life is to wait around until his grandmother and father are dead so he can inherit the family business will arrive in Israel on a historic visit.”

In political terms, the trip seemed to include both some royal effervescence toward Israel, with William extolling the “innovation, diversity, talent, and excellence” of Israel and warmth toward the Palestinians, including a gaffe in which he referred to the Palestinian Authority as a country. His itinerary also referred to Jerusalem as “occupied Palestinian territory,” a phrase Israel denounced but the UK defended.

And the question posed by the smirking description in Haaretz remained: What was the real benefit of the prince’s trip? He wields no real power, and won’t even when he eventually, barring incident, ascends to the British throne. While the monarch of the United Kingdom has some technical responsibilities in regard to Parliament—Queen Elizabeth II officially appoints the prime minister—most of his or her modern duties are merely ceremonial. The royals spend a good deal of their time dealing with charities and similar events. Although there is still strong popularity in the UK for the idea of the monarchy (and the UK economy is expected to take a hit to the economy in the billions of pounds when the queen dies, due to the closures, ceremonies and general hysteria that will engender), it does very little at the moment.

Amid all of the soccer playing and other events that the prince attended, there were, of course, the symbolic moments, which may have their effects. Rabbi Mirvis said, when the prince visited Yad Vashem: “Today’s visit to Yad Vashem was profoundly moving and deeply inspiring. The Duke of Cambridge is a figurehead for a younger generation and he has previously mentioned to me that he feels a particular responsibility to ensure that the lessons of the Holocaust are learned. As the generation of survivors sadly dwindles, there can be no more powerful indication of our commitment to protecting their legacy than the presence of the future Monarch at Yad Vashem.”

And he similarly lauded Prince William’s visit to the Kosel: “Today we experienced a moment of history which will live long in the memory of Jews around the world. The Western Wall stands at the epicentre of our faith. To see the future Monarch come to pay his respects was a remarkable gesture of friendship and a sign of the Duke’s regard for the sanctity of Jerusalem.”

But, in part, William’s trip may have emphasized the greater importance of the British monarchy in the past, as he paid honor to an act of bravery by his great-grandmother.

In The Footsteps Of History // A Fascinating Tour Through The Ancient City Of Rome, Whose Jewish Presence Goes Back Thousands Of Years

Responding to Buchenwald // Understanding the impact Buchenwald made on Rabbi...