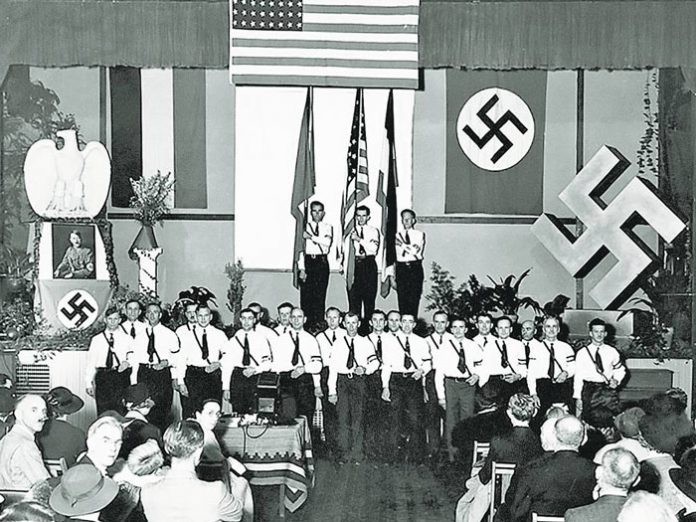 Jewish activists in Los Angeles in the 1930s ran a spy ring that helped break up plans of the Hitler regime and local Nazi sympathizers to carry out violent attacks on the West Coast, according to a new book.

Hitler in Los Angeles: How Jews Foiled Nazi Plots Against Hollywood and America, by Prof. Steven Ross of the University of Southern California (published by Bloomsbury), describes how Anti-Defamation League official Leon Lewis recruited disabled World War I veterans to infiltrate fascist and pro-Nazi groups in the Los Angeles area, primarily the Friends of New Germany, and the Silver Shirts.

The spies provided Lewis with a steady stream of reports about the frightening appeal of these extremist groups to citizens struggling to survive the Great Depression. The phenomenon of desperate people flocking to charismatic leaders who make grandiose promises—and who offer them scapegoats to blame for their troubles—is a familiar story. The fateful question is whether such groups are embraced by the wider society or are relegated to its margins.

THE NAVY INTERVENES
Under ordinary circumstances, a Jewish organizational figure who receives such information would forward it to the authorities. But the 1930s was no ordinary era. Unemployment, fear of Communism, and hatred of foreigners accelerated the spread of bigotry even among some government officials.

So when Lewis met with Los Angeles police chief James “Two Gun” Davis to tell him about the activities of local Nazi sympathizers, he had a rude surprise. “Lewis was shocked when, three minutes into his talk, Davis interrupted him to defend Hitler,” Ross says, “the police and sheriff’s departments [in the Los Angeles area] were indeed filled with men sympathetic to the Silver Shirts, the Nazis, and the Ku Klux Klan.”

Lewis next considered contacting the US State Department, because the reports he was receiving revealed that German ships docking in San Diego were delivering quantities of Nazi propaganda to sympathizers for local distribution. That would have provided sufficient cause for the US government to intervene. According to Ross, Lewis decided not to approach the State Department because he knew that it was “rife with anti-Semites who might leak his reports.”

Lewis scored his first major success in September 1933 when he learned that Nazi supporters intended to infiltrate the San Francisco branch of the National Guard in order to give them access to the local armory. Using weapons they bought from two renegade Marines, the Nazis planned to seize large additional quantities of weapons from the armory and launch a series of violent attacks along the West Coast that they hoped would ignite a “bloody revolution.”

This time, Lewis “contacted [the Office of] Naval Intelligence,” Prof. Ross told Ami in an exclusive interview. Since members of the Silver Shirts’ San Diego chapter were involved in the plot and there was a large naval base in San Diego, the Navy took an interest. “According to the later testimony of the Navy men involved, they arrested the Marines selling weapons illegally and dismantled the storm trooper units that were working with the Silver Shirts,” Ross said.

INTIMIDATING HOLLYWOOD
The part of Hitler in Los Angeles that has been recounted in previous books concerns the local German consul-general, Georg Gyssling, and his connection with Hollywood. Much of his work in Los Angeles involved intimidating Hollywood producers to keep all criticism of Hitler out of their movies. He did this by threatening that if anti-Nazi messages appeared in any of their films, all of the films they produced would be banned from Germany.

Not only that, Ross notes, but US film companies operating in Germany were ordered to fire their Jewish employees and, “with the exception of Warner Brothers, the moguls complied and transferred their Jewish employees to other European cities. Unwilling to abide by the new edicts, the Warners closed their offices in Berlin.”

In Ross’ view, the Hollywood moguls had no choice but to bow to Nazi demands. “Angry as they were, the moguls had to cooperate with Gyssling,” he writes. “They were beholden to stockholders and could not risk being excluded from the German market.”

Only one major studio, Warner Brothers, refused to heed Gyssling. I asked Prof. Ross how the Warners managed to survive the negative consequences of defying Nazi demands. He answered that money wasn’t everything to Jack, Albert, Sam and Harry Warner. “They cared less about profits than most of the other studios,” Ross said. “They simply acted on their conscience.”

However, according to Ross, even the Warner brothers agreed to remove all references to Jews from their 1937 film The Life of Emile Zola, about the Dreyfus trial.

Leon Lewis, who is the hero of Ross’ book, does not come off too well in the controversy over Hollywood and Nazism. At the same time that Consul Gyssling was pressuring producers not to criticize Germany, the ADL’s Lewis was doing the same thing, for a different reason. He was afraid that if Jewish filmmakers released movies criticizing Hitler, Jews would be suspected of trying to drag America into war.

Lewis became particularly concerned that RKO Pictures was planning to make an anti-Hitler film called The Mad Dog of Europe. Fearing that the film “could spark an anti-Semitic backlash throughout the United States,” Lewis “convinced the [RKO] studio to drop the project.”

As it turned out, an independent producer named Al Rosen secured the rights to The Mad Dog of Europe and “released the film a year later as an independent docudrama with a mix of newsreel footage and staged footage.” Here, perhaps, Ross should have noted the fact that contrary to Lewis’ fears, there was no anti-Jewish backlash over the movie.