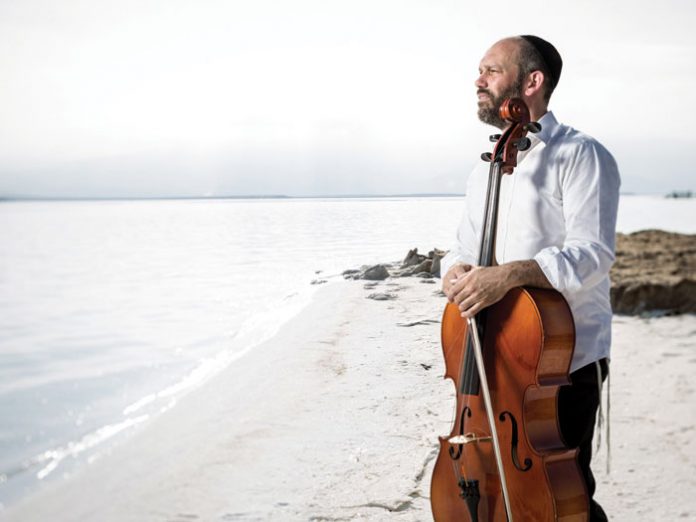 This past December, New York-born Israeli musician Yonatan Razel was vilified and condemned on the Internet and social media as few other Orthodox singers have ever been. After being photographed with duct tape plastered over his eyes while singing and playing the keyboard at a women-only concert in Jerusalem, the photo swiftly went viral.
What was perhaps even more egregious in the eyes of his critics was the statement released by the 45-year-old musician’s representatives confirming that he had covered his eyes for religious reasons:

“Yonatan Razel’s face was uncovered for the entire performance. The photo in which he is seen with his eyes covered represents only a few minutes, during which some women formed dance circles at the foot of the stage. This was his personal decision so as not to be able to observe the dancing women. Afterwards he removed the covering and continued to perform.”

Na’amat, an Israeli women’s rights organization, fired off an indignant Facebook post, demanding to know: “How far will this supposed religious extremism go? And who are the religious authorities who encourage this bizarre behavior?”

However, the award-winning singer, who lives in Jerusalem with his wife, three daughters and a son, and learns most of the day in kollel, never got to read any of the shrill put-downs. As he tells me, he has never (never!) surfed the Internet or glanced at social media. In short, his eyes are equally holy offstage or on. That a singer of his caliber can remain totally oblivious to what’s happening in cyberspace is one of the greatest ironies about present-day Israel. Few could have foreseen that the level of kedushah would exceed that of the Diaspora many times over. The kosher phone Yonatan shows me may be commonplace in Eretz Yisrael, but an oddity anywhere else.

Then there is another issue—that of lashon hara. When I ask him to compare his music to that of any other singer, he repeatedly declines, because, as he explains, it would imply that theirs falls short. And who is he to say anything positive about his own music?
Speaking with Yonatan is a humbling experience. It makes one feel small and unworthy. But Yonatan is by no means dull or austere. He is full of charm and bubbling with life, posing playfully for our photographer, Ezra Landau. We go on to have an interesting and stimulating conversation.

Background
When I inquire about his background and surprising fluency in English, he explains that he grew up in a bilingual home.

“Did you grow up in a religious home?” I ask.

“Not really. My parents became baalei teshuvah when I was seven or eight years old. The truth is that they were already traditional and kept certain things before that, but that’s when they became really observant.”

“What does your father do?” I inquire.

“He was a professor of psychology, but around 20 years ago he realized that he didn’t believe in any of the stuff he was teaching so he went into the real estate business, while the other half a day he sits and learns. He also wears a shtreimel, because many years ago he became a member of the Perushim HaYerushalmi’im. He has a long beard and wears the full levush. He also runs a kollel for the Perushim community.”

“Where do your parents live?”

“She also has a doctorate in psychology, which is how my parents met in New York, where they got married and where I was born. She had her own company that administered intelligence tests and things like that, but she left it about 15 years ago and now works with my father.”

Resetting the News to level Max // a conversation with Chris Ruddy, CEO of the Newsmax empire, on taking on the media establishment in...