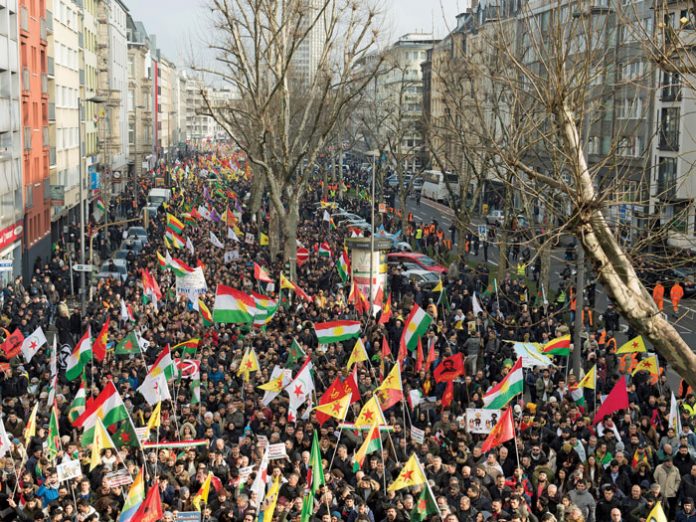 I recently read an interesting Gatestone article about Kurdish gangs taking over parts of cities and towns in Germany. The Gatestone Institute has become a reasonably reliable research source for serious conservatives in both parties who shun the nutty conspiracy theorists, right-wing radio hosts and other purveyors of popular fables and fake news.

The Kurds have been renowned for their military prowess since the time of Salah ad-Din (Saladin), the military genius who wrested control of Jerusalem from the Crusaders and sent them back to Europe. The Kurds have been America’s allies in several wars, including the war against ISIS. However, where the Kurds once saw Trump as their liberator, they now realize that once again they are being abandoned by an American president who wants to bring his own troops home, now that the Kurds have defeated ISIS for him. The Syrians, Turks and Iranians are all ganging up on the embittered and abandoned Kurds, who have become refugees, fleeing their homeland for Germany, which has generously let them in.

Kurds in Germany
The Kurds have become a royal pain in the neck in Germany. They have reorganized themselves along Kurdish clan lines and turned their operational experience as soldiers in a new direction—organized crime. Kurdish thugs are telling German businessmen they must pay protection money every month. When the police investigate, the Kurds laugh and tell the cops to go away, saying, “We outnumber you.” It is not an idle boast. If the police come to arrest one of the gang members, cellphone calls go out and the streets fill with hundreds of protesting Kurds who will not allow the police to proceed. Some municipalities are so intimidated that the elected leaders are not allowing Kurds to be arrested for fear of a riot or retaliation.

Phenix City, Alabama, once experienced a complete breakdown of law and order. Criminal gangs ruled over a frightened populace and ran vice, drug and gambling rings. The Gatestone article made me think that several towns in Germany are on the verge of becoming the Kurdish versions of Phenix City. But this is not about Islamic extremism. The Kurdish gangs may be crooks, but they are not supporters of ISIS. Anything but!
This is a war of intimidation by organized crime, not a religious war to restore Northern Europe to Muslim rule, as some have claimed. Each of the Kurdish gangs in Germany is fighting to control its own turf for selfish financial profit, not for the glories of Islam. Still, in the areas they do control, they are making life very uncomfortable for the Germans who took them in.

As a former federal prosecutor, I believe that a task force to prosecute organized crime on a national level would be Germany’s most effective response. Attorney General Robert F. Kennedy established the first such organized crime (OC) unit inside the Justice Department. This was back in the day when J. Edgar Hoover’s friends in the Italian Mafia asked him to deny that the Italian Mafia even existed. In return, the Mafia gave Hoover “tips” on which horses would win at his favorite racetrack. Hoover’s “gambling” winnings greatly supplemented his meager government salary. Hoover was just another corrupt cop who was paid to look the other way.

Attorney General Kennedy’s organized crime task force bypassed the foot-dragging FBI and began to prosecute the Mafia successfully on its own. Hoover quickly changed sides and ordered the FBI to go after the Italian Mafia, too. In his eagerness to play catch-up, Hoover allowed the FBI to shield murderers and thieves in the Irish Mafia who turned informer on the Italian Mafia.

Sometimes the right things get done for the wrong reason, and some of RFK’s tactics were very wrong indeed. He authorized warrantless wiretaps on the Mafia leaders for intelligence purposes, which was completely illegal. But most of RFK’s innovations against organized crime were ethical and effective, and deserve to be emulated today.

Germany should authorize law enforcement at both the federal and state levels to bring civil cases against the criminals. For example, if large amounts of drugs are found in a private home, the house should be seized for serving as a drug warehouse. Similarly, the police can be authorized to shutter drug dens, casinos and other suspected organized-crime businesses until the owner identifies himself and shows a legitimate source of income to explain how he purchased the building and other assets.

Since asset forfeiture is a civil and not a criminal proceeding, the privilege against self-incrimination does not apply, and the burden of proof shifts to the asset owner to show a legitimate source of income. We have been doing this for decades in America, hitting major drug dealers in the pocketbook, where it really hurts.