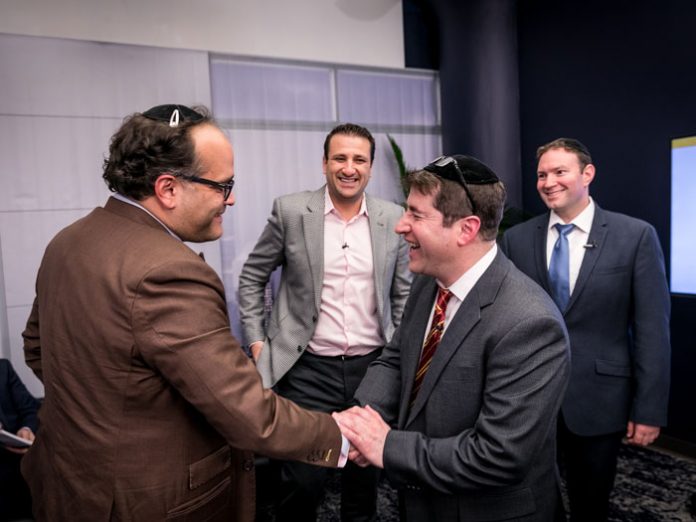 Rabbi Benzion Klatzko isn’t just a co-founder of Shabbat.com. For many years he’s been a leader in the world of kiruv and has traveled the world meeting leaders of many industries and businesses.

While talking to Rabbi Klatzko about Shabbat.com, it was impressive to learn how it has connected so many Jews from all affiliations and backgrounds and enabled them to connect with other Jews. But it was also clear that he is a true visionary who sees the bigger picture and the financial potential of the platform.

When Rabbi Klatzko and Yehudah Koblick entered the tank, they had the Moguls’ attention right away. That’s because they offered more than a nebulous concept. They pitched a proposal supported by past achievements and earned success. The primary reason new innovative business concepts fail is because of a lack of funds or capital. Investors cannot always envision how an idea will translate into a viable business and are hesitant to invest their resources in the unknown. But Rabbi Benzion Klatzko and Yehudah Koblick made their vision clear.

Internet publishing and broadcasting companies like Facebook, Google parent company Alphabet, and Twitter have proven to be the fastest growing companies in the world. Because the combined annual revenue for the industry exceeds $135 billion, the result is a highly competitive and concentrated industry. The top 50 companies account for 80% of market revenue, with Google and Facebook leading the pack. Also, the barriers to entry are low: It costs little to nothing to establish a blog, which explains why there are approximately 7,600 entities that operate in this space, including news aggregators, entertainment, and social media platforms. Nevertheless, only a select few attain the wild success of becoming an industry ground breaker, and even fewer companies succeed in converting visitors and viewers into revenue.

Venturing into the Internet publishing and broadcasting market carries distinctive risks. As Aron Pinson eloquently observed, the demands of this industry can become a bottomless pit. Young companies aspiring to compete with industry giants have to be able to bear the cost of competition. Even a site with exceptional technology will be hard-pressed to compete with the name recognition and market clout that industry leaders enjoy. If it does enjoy success for its efforts, there is no guarantee that a new site will experience the same exponential growth and popularity of the few companies that have cornered the market.
Through Shabbat.com, Rabbi Klatzko and Mr. Koblick‌ have established a unique technology that is capable of even outpacing Facebook in terms of real-user engagement. However, in order to conquer the travel industry, Shabbat.‍com will have to meet the challenge of getting its technology firmly fixed onto every desktop, laptop, and mobile phone, just like the competition at Facebook and Twitter and travel industry giants such as Expedia.

The only way to take on the big players is to target and win a niche market. However, even in a niche market, a business will have very little room to maneuver around the behemoths pervading that industry. Should Shabbat.com choose to enter the travel industry, it could be stopped cold by Expedia. If Expedia finds that their idea is worth emulating, it may quickly join up with other huge companies, replicate Shabbat.com’s technology, and—with their already firm grip on the industry—effortlessly drive the embryonic business into the ground.

Nonetheless, I identified the duo’s technology as a marketable product and valuable asset. If the Shabbat.com team applies their advanced technological software to a new industry, they can potentially license or sell it to a large company like Expedia.

You may wonder why a company like Expedia would acquire the technology from Shabbat.com rather than just replicating and seizing the software for themselves? The answer lies in how technology is valued.

A prevalent method to value technology is cost. That includes opportunity cost. Shabbat.com already invested in the development, enhancement, and testing of their software, including the experimentation and fixes for bugs and errors. Should Expedia try to usurp their business, it would be starting from a financial ground zero, and a purchase would most likely be cheaper than an investment. The second factor to consider is the time it would take for Expedia to build such software—investing the time in developing a new product, rather than purchasing the software. That translates into lost revenue and takes away from the resources needed to hire talent and also to advertise the product.

I was impressed by the superiority and potential of the team’s technology, and believe that Shabbat.com’s unborn travel site brother has the potential to join the ranks of Facebook, Google, and Twitter in its explosive growth and domination of the Internet publishing and broadcasting industries. However, the value it possesses is not in its following or niche influence; it is in the advanced technology. That technology may translate into a valuable and winning commodity for many Internet industry leaders. I predict that we’ll see impressive profits for Shabbat.com.