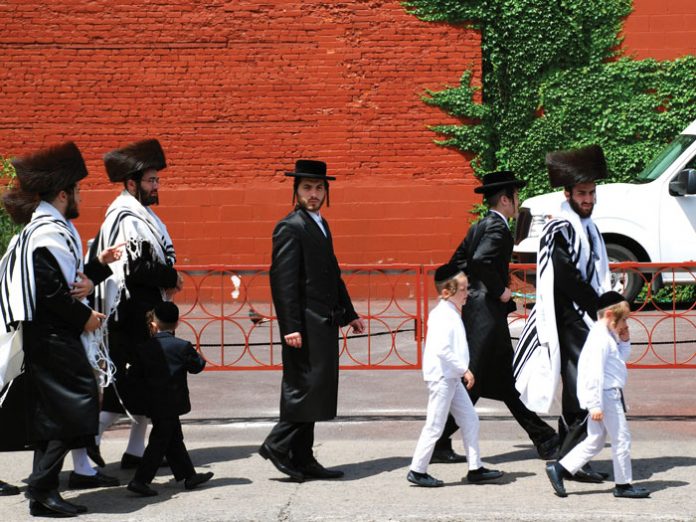 “Yellow Protest Badges Spark Outrage”; “Outremont Residents Criticized for Yellow Pins Evoking Holocaust”; “Outrage As Yellow Badges Worn to Protest Jewish Use of School Buses in Montreal.” Those are but a sampling of the headlines Montrealers woke up to last week. The headlines were the result of a confrontation at the Outremont city council the night before between a handful of Outremont residents, and chasidim and their supporters.
Outremont is an upscale neighborhood in Montreal that is home to upwardly-mobile French-speaking professionals. There is also a burgeoning chasidic community that comprises about a quarter of the population. Over the years, there has often been tension between the chasidic community and a small but very vocal segment of the French-speaking residents. While many of the issues that were raised initially seemed rather minor, the anti-Semitic rhetoric and blatant discrimination it has sparked is anything but.

In the past, people like Céline Forget and Pierre Lacerte, who have become infamous in their deliberate attempts to whip up hatred against the chasidic community, had the full power of the law behind them. Céline Forget herself was a member of the Outremont council, and she had the other councillors as well as the mayor on her side. The group went after the Purim buses used by bachurim, the construction of sukkos, hachnasas sefer Torah parades, and the eruv, to name just a few. They succeeded in passing several by-laws that adversely affect the chasidic community, the most egregious of which followed a bitterly fought campaign and a referendum, and basically bans any new shul from being built in Outremont.

Pierre Lacerte is the author of a blatantly anti-Semitic blog filled with lies and innuendo. The subject matter is always the supposed sins of the Outremont chasidic community. Over the years, Lacerte has managed to magnify every minor skirmish between the chasidim and some of their neighbors using his blog as well as other forms of social media.
However, the tide eventually turned in favor of the chasidic community. A young chasidic woman by the name of Ms. Pollak, who belongs to the Vizhnitz community in Montreal, ran for a council seat so she could effect some change politically. In 2013, to the satisfaction of many Outremont chasidim, Ms. Pollak won a seat on the Outremont council. What followed were several years of continued clashes between her and the other members of the council, as well as former Outremont mayor Marie Cinq-Mars, who were openly hostile to the chasidim they purportedly represented. During those years, there wasn’t much Ms. Pollak could do except protest the constant barrage of accusations and innuendo, as the numbers were against her.

That all changed this past November when Mayor Cinq-Mars decided not to run again. Perhaps she could see the writing on the wall, or perhaps she was tired of fighting. What followed was a resounding victory for Projet Montreal in Outremont, the party to which Ms. Pollak belongs. Not only did she reclaim her seat—three out of the four council members, as well as the newly elected Outremont Mayor Philipe Tomlinson are all members of her party. At the time of the victory, Max Lieberman, a well-known activist from the Satmar community, said about Tomlinson, “He is not a stranger. He and his team have been working with us for the past four years.”

The shift in power was a huge loss for Céline Forget and her cohorts. Whereas there was constant bickering at council meetings of the previous administration, things are now much calmer. In a desperate bid to gain some attention, the group sunk especially low, when it decided to target the yellow school buses used by local Jewish private schools to transport students to and from their academic institutions.

Almost as bad as targeting the children of the community is the way the group decided to voice their opposition. At the Outremont council meeting last week, a group of about eight or nine protesters showed up with a box of yellow rectangle pins, which they encouraged the people in attendance to wear. While they claim they chose yellow pins because the school buses are yellow, many in the Jewish community were appalled by them, saying that it evoked memories of the Holocaust, when the Nazis forced all Jews to wear yellow stars on their clothing.

The group claims that the buses block the streets and are a nuisance because they run in the summer and at “odd times” during the day and evening. “On just one residential, one-way street, there are 14 buses in one hour!” says Outremont resident Ginette Chartre. “That’s not reasonable.” The group’s members argue that the heavy traffic isn’t safe and interrupts their quality of life.

But Outremont city Councillor Pollak says the buses are actually a solution to the traffic problem. “If parents took their kids to school, the situation would be much worse,” she says. “There would be huge traffic jams every morning and afternoon, with many more vehicles filling the streets around the Jewish schools. The fact is, we are a growing community, and there is absolutely nothing we can do about this issue.”

Rabbi Mayer Feig, a local activist of the Bobov community, says the community has tried to do whatever it could to appease the opposition. The schools have instituted corner stops for older kids, to minimize the bus stops and the resulting traffic. But at the end of the day, he says, the buses have to stay.

Will Europe Finally Cut Off Russia? // Moscow plays hardball with...