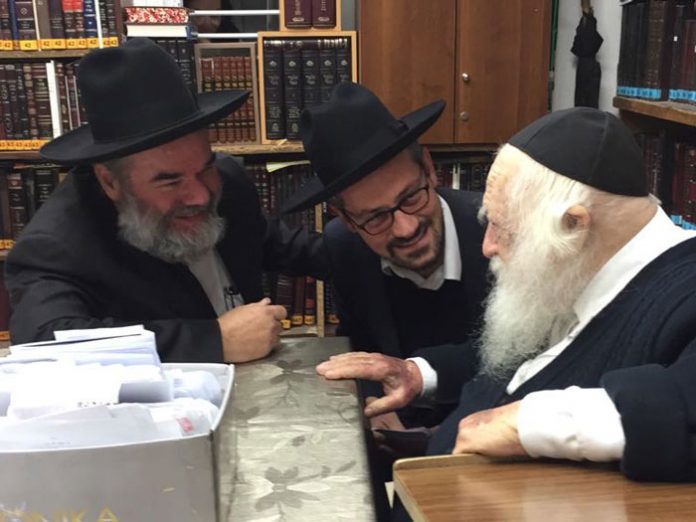 Please tell me about the event that’s taking place this week in Mexico, with the gathering of roshei yeshivos and rabbanim from around the world.

The event is meant to strengthen Yiddishkeit in Mexico, and particularly Ashkenazi Yiddishkeit in Mexico. For the last 30-35 years this has been mainly a Sefardi kehillah, many of whom were chozeir biteshuvah. There are frum Ashkenazim here as well, but most of them learned and are learning in the Sefardi mosdos. Many of the Ashkenazim here have neither the havarah nor the minhagim of the Ashkenazim because they don’t have whom to learn them from.

About 13 or 14 years ago there was an Ashkenazi melamed who taught in a Sefardi mosad. He felt that there were enough Ashkenazi children to try to revive the Ashkenazi Yiddishkeit according to the mesorah. They asked Rav Shmuel Kamenetsky to be the nasi and they opened the mosad, which they called Derech Emes. This mosad is organizing the event.

What are the undertakings
of Derech Emes?
Within that mosad there is a kindergarten, a girls’ school and a boys’ school. We have over 250 students in the mosad altogether, and we’ve reached ninth grade. The way it works here is that seventh, eighth and ninth grades are considered junior high school. Next year, im yirtzeh Hashem, we plan to open a yeshivah ketanah for the boys and a high school for the girls. In order to do that we also want to bring in about 20 Ashkenazi yungeleit from either Israel or the US to start a kollel. Rav Shmuel Kamenetsky’s eitzah was that the kollel yungeleit should specifically learn in the school—he told me that something similar was done in Detroit recently—and that’s really going to be mechazeik the whole thing. The kollel will be named Ayeles Hashachar al sheim Rav Aharon Leib Shteinman, zt”l. Rav Shteinman visited the community twice and gave us a lot of chizzuk to build Torah here.

How did the Sefardic community become the dominant Jewish one in Mexico?
Just to give some historical background, about 100 years ago when Yidden started coming here, they came from both Ashkenazi and Sefardi backgrounds. Those who came from Ashkenazi backgrounds were much more frum then. As there weren’t any real mosdos for their children they sent them to Eretz Yisrael or the US and they didn’t return. The Sefardim naturally keep together more, so most of their children stayed. Some of them did leave, but they later returned and started building the community here.

If I understand correctly, the first Jews in Mexico were Spanish, and there was an Inquisition in Mexico
as well.
Most of those Yidden were completely lost. They say that there are different tribes of Mexicans today who claim to come from the Marranos, but what we’re talking about is the Yidden who came here in the past 90 years.

Does Mexico City still have some chasidim living there?
Not really; there aren’t any shtreimlach here anymore, for example. I’m not saying that there aren’t a few Yidden with a chasidishe background, but that’s about it. I think that it’s really missing here. It would be great if we had at least one chasidishe shtiebel.

I assume that the Sefardi community is wealthier than the Ashkenazi community.
I don’t know if that’s true regarding the non-frum Ashkenazim, who are very wealthy but also not connected. But the tomchei Torah in Mexico are definitely the Sefardim.

Is Derech Emes flourishing?
The school is at a very critical matzav right now, to quote Rav Shmuel Kamenetsky, and what happens next will either make it or break it. Therefore, we’re opening a high school, a yeshivah and we’re bringing in kollel yungeleit. This means building new buildings, for which we’ll need significant funding, and it’s also to raise the “gaavah Ashkenazis.” Right now it’s not mechubadik to be a chareidi Ashkenazi in this city. We would like to strengthen out identity. Baruch Hashem, it’s being done with shalom; all the Sefardi rabbanim signed on the invitation to the dinner inviting everyone to come. The rabbanim and roshei yeshivah whom we are bringing include Ashkenazim and Sefardim. We have both Rav Leizer Yudel Finkel and Rav Toledano among the invitees coming from Eretz Yisrael, and we have Rav Shmuel Kamenetsky, Rav Feldman and Rav Dovid Ozeri coming from the US. Rav Raful was also supposed to come, but he had to cancel at the last moment. The same applies to the guests of honor—we’re having both Shlomo Yehuda Rechnitz and Ezra Irani. We want this to be completely b’shalom, and it is being done b’shalom. At the same time, everyone recognizes the need for the Ashkenazim to be mischazeik among themselves.

A Cleaning Lady To Fall For // When Your Cleaning Help Gets Injured While...