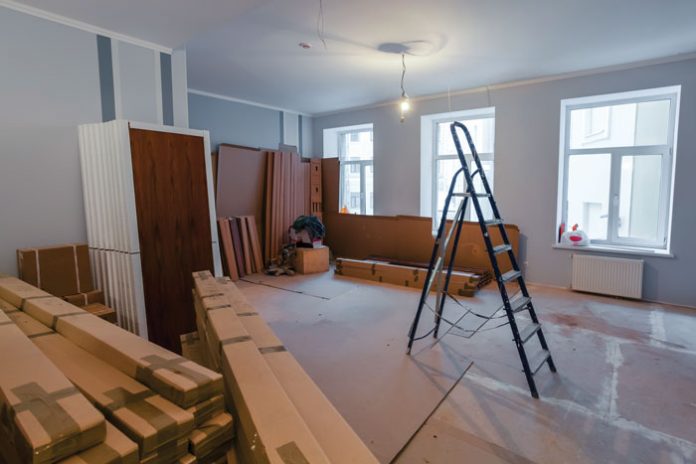 “You walk on the plank like this,” says the contractor, demonstrating for my benefit. “Plank” is a generous term for the thin piece of wood balanced between two concrete blocks that have been placed on the newly installed tiles. For the next few hours, this is the only way we can access the back part of the house. My vertigo notwithstanding, I hold on to my son for dear life as I inch my way across like a tightrope walker.

Such is life when one’s house is under construction. I smile bravely as I try to ignore the frustration of the Russian tile installer whose only wish is to do his job without people constantly in his workspace. In the background, an Arab worker is fitting the tiles with precision. I think back to the beginning, when we spoke to our contractor for the first time.
“No Arab workers, right?” I had asked because I was fearful.

“No Arab workers,” was the reply. I sigh.

“You know,” says my son, “our house is starting to sound like a joke: Two Jews, two Russians and two Arabs walk into a house…”

The punch line is the incredible mess and dust they are kicking up. It looks like we’ve just been visited by a blizzard, as particles of dust cover every imaginable surface.

“There’s even dust in the cereal boxes!” exclaims my daughter, as she unceremoniously throws a box in the garbage.

There’s an old-time storybook our family loves entitled It All Began with a Doormat. In our case, it all began with a badly waterproofed bathroom that caused our walls to become permeated with water. Then somehow it morphed into a whole house renovation.

“Doesn’t this look great!” comments our contractor as he stands back to admire his handiwork. The tiles in the hallway are really beautiful. The only problem is that the living room tiles now look terrible by comparison.

Maybe we should tile the living room too? Sure, let’s. Wow! What a difference! But now the front door won’t close—plus, it looks so dingy next to the new tiles! We spend that Shabbos on lockdown, since the door won’t open and close normally because of the floor’s new height. Hey, maybe we should replace the door too? Great idea!

The new front door is soon installed by a chasid who sings merrily as he works. My son looks at me and laughs. Our house is being invaded by workers from all strata of Israeli society. Our milchig counter has turned into a coffee bar, and I try not to gag from the constant aroma of Turkish coffee.

Suddenly, my daughter sidles up to me and taps me on my arm. Then she nods her head slightly in the direction of the electrician. “He just took a bath in our sink,” she whispers, looking up at me with a mixture of wonder and horror. I’m sure—I mean I desperately hope—that she is exaggerating as I see him walking away from my fleishig sink, drying himself off. I try to keep my OCD from blossoming into a fit of anxiety. This is what psychologists call “flooding,” exposing a patient to his worst fear by introducing it over and over. When I notice another worker washing a bucket full of concrete in my milchig sink, I run over to the contractor in a panic. He laughs and says, “Yeah, I guess they don’t know how you feel about cleanliness.” Hmph.

Did An Orthodox Jew Find A Cure To Covid-19? A Conversation With Dr. Zev Zelenko