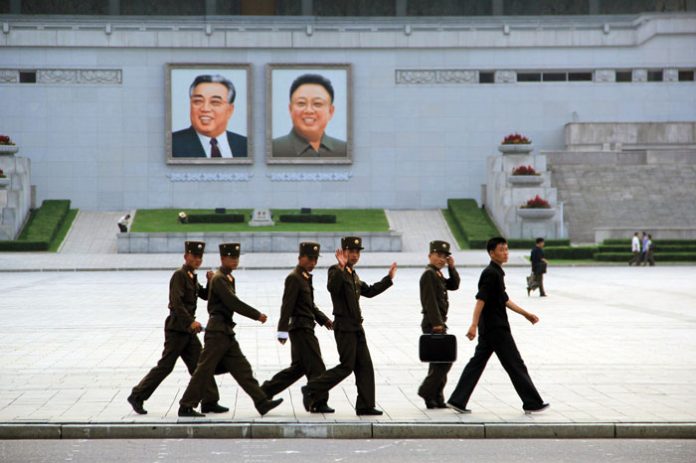 To avoid another shrill and unwanted wake-up call, I get up this morning just before six. The phone does not ring. I refuse to admit to myself what this means. As I get myself organized, I see through the large window that the locals have beaten me this morning. They have been awake since dawn and foot and bicycle traffic is lively on the banks of the Taedong River.

Yesterday John explained to me that in Korea they get up at sunrise and go to bed at sunset to save energy. What he isn’t saying is that due to a shortage of electricity, working hours are planned to maximize daylight hours. “We receive five hours of electricity a day,” he finally admits. “Every area and every neighborhood gets it at different times.” When I looked out of the windows of the hotel’s rooftop restaurant last night, I saw total darkness. Only the red torch of the Juche Tower illuminated the blackness. It was very disturbing to me to be situated in a modern hotel with hot and cold water and unlimited electricity while the people below me have to suffice with a few kilowatts a day.

Unlike yesterday’s sojourn into an empty dining room, this morning I notice a group of six Westerners in the hotel restaurant, in addition to yesterday’s Chinese couple. The Westerners include a middle-aged man with wild gray hair and five young men. The older man’s name is Calvin and he invites me to join their table. He tells me he is from Hawaii, is an internationally renowned diving instructor, and despite the American travel ban, he came here to lead this small group made up of an Argentinian, a Norwegian, a Brit and two Germans. They are all members of an international professional divers organization. Calvin, who also heads a humanitarian organization for peace, organized the visit to teach diving skills to the locals.

“I believe in imparting knowledge in order to bring people together,” Calvin tells me. “This is my sixth visit here with a group of professional divers. We train the locals. They take us to a river or the seashore—their choice—and we teach them diving skills. I believe in creating a connection between us. I want the Westerners to learn that the people here are good and not warmongers. The Koreans learn that Westerners are simply human beings. This is how peace can prosper.”

“How do you communicate?”

“Diving is an international language. We also have an interpreter with us, and the rest is by hand gestures. We create a bridge for communication and connecting people.” The other members of the group nod in agreement. I presume they missed the national celebrations of the military test that took place yesterday. Maybe if they saw and heard the war-themed propaganda that was on display, this cheery group would be a little less optimistic.

I change the subject. “Six visits is definitely a lot, and there are so many rules here. Have you encountered any mishaps here as a foreigner or ever felt that you might be in jeopardy?” I ask him. “No, not really” he says. But he did go on to recount one case in which he was diving too far out and came upon an underwater structure of some kind. A naval patrol boat sped out and arrested him—apparently he had crossed into a military installation. After an interrogation and intervention by his local Korean contacts, he was released without any problem.

“Why did they bring you to that area in the first place?” I ask, as I consider that maybe this isn’t all so innocent. Are the Koreans using Calvin’s goodwill to teach diving skills to members of the Korean armed forces? When I express my suspicion, he admits, “The army here is huge, so who knows? Maybe sometimes they bring me young men of army age, but I am officially not connected to the army nor am I a military instructor. I am a seeker of peace and would not involve myself in anything else.”

“Maybe they’re taking advantage of your kindness and love of diving?”