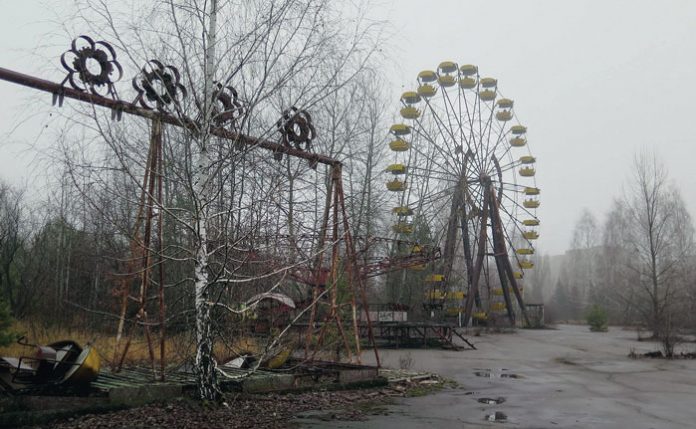 The sky is clear and blue, the forest is a vibrant green, and the sun is shining through the leaves of the maple and pine trees. We are in Ukraine, at the edge of the once chasidic city of Chernobyl, facing the gravesite of the holy maggid and author of the Me’or Einayim, Rav Menachem Nachum of Chernobyl, zt”l. In front of us stands a small unassuming reddish building with a large black door. This small structure is the ohel of Rav Menachem Nachum, the noted talmid of the Baal Shem Tov and the Maggid of Mezritch.

As I wait for the door to be unlocked, I notice the silence. There are no chirping birds, leaves rustling in the wind or insects buzzing. There is only a terrible quiet—the sound of death. Literally. Our guide Sergei confirms, “There are no birds here. Once the forest was full of birds, but they all died. Occasionally I see a crow passing by, but there aren’t even any mosquitoes or flies within a 30 kilometer radius of the nuclear reactor.” As soon as he utters his last syllable, the silence returns.

Suddenly a sound, the likes of which I have never heard before, fills the air. It seems to bounce off the silence that surrounds us. Sergei looks to the north and then peers at the phone in his hand. “I’m not getting an emergency message,” he says. He makes a call and fires a series of questions at the person on the other end. “It’s okay,” he reports to us, with some relief, “we can stay a little longer, but be prepared to leave at any moment. We may have to return to the car and get out of here quickly.”

I wonder if we should not take any chances and leave right away. But Sergei reassures us that we’re fine and that we should enter the ohel as intended and then leave.

In the area around the reactor lies a huge forest that absorbed radiation. Since 1986, the trees have remained standing, dead and dry. Any small spark could ignite them. If that were to happen, the ash and cinders would release large amounts of radioactive particles into the air that would be dispersed by the wind. Exposure to this radiation could cause the death of any living creature. So the wind alarm system was put in place.

But there is some optimism, according to Sergei. “Things are relatively good now. Although all the wildlife are dead, the forest is slowly coming back to life. I think it is encouraging that maybe death did not completely take over Chernobyl. Everything is under control. Of course, that is what the Soviet authorities claimed 30 years ago, that ‘everything was under control.’ But today, Chernobyl, which used to be a lively city mostly inhabited by Jews, is dead and empty like this forest.”