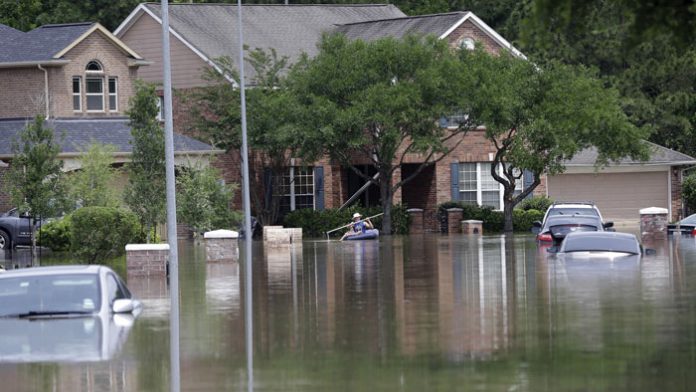 Spread across hundreds of miles in Texas, Lousiana and several other states, Hurricane Harvey came, wandered for a while, and then left, leaving behind it a massive area of destruction that rivals the most destructive storms in recent US history. With at least 30 people dead, over 40,000 homes destroyed and over a million people displaced, the area, and Houston in particular, is facing a monumental task to survive and rebuild. And the effects on the US economy are likely to be large.

Thousands of people needed to be rescued from the floodwaters, with much of those doing the rescuing—by outboard and canoe—civilians. Sixteen thousand Texas National Guard members, along with several thousand other military members, assisted local authorities in finding and saving those trapped in their homes. Rescues were still taking place over a week after the hurricane came through.

Supplies have been dwindling in some areas, and Texans lined up for gas and food in many places. With roads still impassable, private pilots have been taking a role in bringing supplies to areas cut off by water, along with government groups and NGOs like the Red Cross. A group called Sky Hope Network had about 70 planes flying over Texas, with 27 flights into Beaumont, Texas, alone, to drop off bottled water when the local water supplies ran out. Private pilots have spent about $1 million in gas and other expenses on such missions so far, according to the group.

Texas is a major driver of the US economy, and Houston is the fourth largest city in the US, with about $500 billion worth of economic activity a year itself. How the hurricane’s damage will affect the overall economy is still unknown, but the impact will be noticeable. Oil and gas will be one sector hit hard; the storm knocked offline a third of US petroleum production by shutting down refineries and other facilities along the Gulf Coast. Average prices at the pump have risen more than ten cents since the storm, and that alone will knock billions out of the economy.

Moddy’s estimated the cost of damage to businesses to be between $10 billion and $15 billion, with infrastructure costs as high as $10 billion. Some of the damage was dramatic: Two explosions at the Arkema chemical company’s plant in Crosby, Texas, threw flame and smoke into the air.

FEMA reports that 350,000 people have already registered for assistance from the government, with 37,000 claims from the National Flood Insurance Program by the end of last week. Many of those claims will not be covered, though, and it is likely that individual losses will be severe. The region and its inhabitants will be recovering for years. And analysts believe that US GDP will be down by as much as a full percentage point over this year, and that the Fed may hold off on raising interest rates because of the storm’s economic effects. The money poured into recovery may help bump up the economy, however.

Despite the massive scale of the storm damage and the extent of the government and private response, the stories coming out of Houston and the region are individual ones, as well, vignettes of people surviving the rising tide and reaching out to their neighbors, sometimes to save their lives. In the following pages we look at some of those individual experiences.

Our Haunted Apartment // Was there something wrong with my ...

Exclusive Interview with Passion and Candor // A conversation with popular...

The Gaon of Memphis // Rav Nota Greenblatt shaped the world...