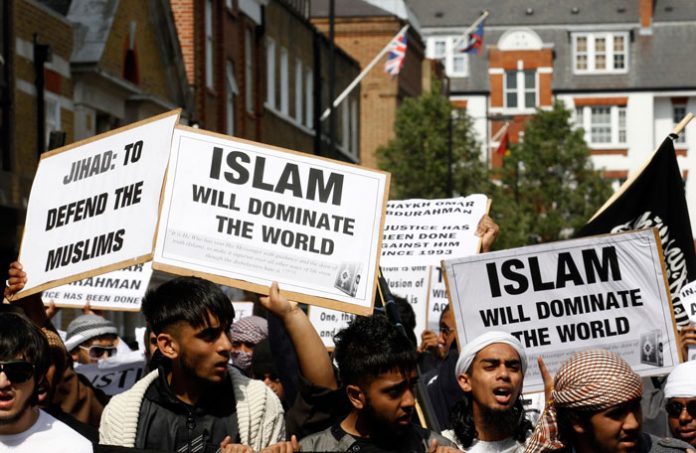 There have been several gruesome attacks by Islamic extremists in Britain during recent months: knife stabbings, ramming people on a bridge, and lowest of all, a bomb attack on teenagers and children attending a pop music concert. Several of the terrorists were under occasional police surveillance, but there were too many suspects and not enough cops. The killers struck their targets with ease. It was enough to drive one mad.

I watched the television in horror. A 48-year-old white bigot went berserk and drove into a crowd of innocent Muslim worshippers as they were leaving their mosque in Finsbury Park, London. More than a dozen were injured. One died from a heart attack. Someone dragged the bigot from his vehicle and began to beat him up. The religious leader of the mosque, the imam, intervened and told his flock that they must not injure the attacker in their custody—only to safely restrain him until the police arrived. The Muslims submitted to his gentle authority and did no harm to the one who harmed them.

As the British bigot was taken away by the police, he screamed that he would be back to kill more Muslims. The contrast in response between the belligerent bigot and the moderate Muslims touched the heart of Londoners. They came and placed flowers at the Finsbury Park Mosque entrance in honor of the Muslim victims, just as they had placed flowers for the previous victims of Muslim terrorists. What a kind and gentle thing to do.

Violence is never a permissible means of expressing political angst. All religions strictly forbid the killing of innocents. The innocent victims of the Finsbury Park Mosque are not to blame. If innocent killings are avenged with more vengeance killings of more innocents, it only increases the number of innocent victims. That is no path to justice.
But in the recent past, not everyone from the Finsbury Park Mosque was an innocent. Supervillains took over the mosque for a while on behalf of al-Qaeda. The moderate Muslims were the first to be attacked. Some were beaten to death. But later, thousands upon thousands of victims, including Americans, French, Britons, and Israelis died because of the terrorists’ takeover of Finsbury Park Mosque.

British intelligence turned their backs and let it happen. There was no justice in Britain for the perpetrators of terror who made the Finsbury Park Mosque the spiritual and financial center of al-Qaeda operations around the world. When Osama bin Laden cut them off financially, the leaders of Finsbury Park Mosque filled the financial void with a crime spree, robbing stores, forging credit cards, and stealing cars all across England. The Finsbury Park Mosque criminal syndicate alone raised close to $20 million for funding terrorism. The British police protected them.

Finsbury Park Mosque was the crossroads where the terrorists met to plot and then went out to blow up US embassies, American hotels, the USS Cole, the French subways, and finally the big one, 9/11. The attackers knew they could get away with it because they were pretending to be informants for British intelligence. But what good are spies if you never use their information? The British intelligence services may have even had information about 9/11. The British Secret Service (SIS) had secretly told the terrorists to do whatever they wanted overseas as long as they left London alone. It is the most embarrassing scandal in recent British history.